SIMBAD AND THE CALIPH OF BAGDAD a film by Pietro Francisci

Schiahriar, the Coliph of Bagdad, kills the soloist of the dancing girls who think they are dancing before him, represented on the throne by a monikin. Two sultans, Asem and Serembid, would like to rebel against him, but they ore dominated by the Visir. Sinbad, a sailor very alike Schiahriar, arrives in Bagdad to come into possession of a rich inheritance, through tl-ie fragment of a parchment where is written an incomplete sentence: "The other half is in the Grand Coffer". Read More

But all his property has been confiscated. Sinbad, ends up in a tovern two rogues, Firuz and Bahman, after getting him drunk sell him to a recruiter of crews. He wokes up to find himself on Saadi's ship, the lotter is a slave mer-chont, but also the two thieves hove been caught and sold to Saadi as cooks. When the beautifui Sheherabode comes on board of the ship, she Iooks at him with scorn, Sinbad compels the twa rogus to drug the eunuch so that he con put on his clothes and thus enter the princess's cabin. Sheherabade surprisèd and then amused, telis the younq man that she has to marry the Ca-iiph, but when Sinbad proposed that they escape together, she becomes afraid and gives the alarm. Sinbad, Firuz and Bahman ore condemned to death. Sheherabade intervenes, and the three men ore abandoned in a rowing boat which Ionds them on a deserted isle with wrecks of ships, a useless treasure and primitive bombs. When the three men have finished their food, they decide to die o sweet death by taking a stronq dose of o druq prepared on the spirit Iamp of o unexpected fire-balloon which rises into the sky with the three surprised costaways, the bombs and the treasure. In Bagdod, the three men followed by Àsem and Serembid, the twa sultans, who hove noted the likeness of Sinbad to the Caiiph, got to the slave market where also Schiahriar, token by on epileptic fit, is carried away by Firuz and Bahmon who beiieve him to be Sinbad. Serenbid and Àsem ore happy witnesses of the exchange so the lotter convinces Sinbad to take the piace of the Caliph, while Serembid persuades Schiahriar to remoin under cover in the tavern of Firuz and Bahman. Àsem then tells Sinbad that the Grond Coffer is in the poi-ace, ond the youn g man, havin g heard that Sheherazade is in the harem goes to iook far the giri and when sii e sees him s~e is upset becouse she thinks that she is in the resence of the Caiiph. During the night, Sinbod, Firuz ond Bahman open the Grand Cover but ore caught in a tra p. The dancing girls their donce with Sheherazade os the soloist; Schiahriar p repares to kii i her from his hidin q lace when he heors the Visir announce that he hos been dethroned. Às answer the Coliph kil s h im whiie the mcmnikin rises from the throne: it is Sinbad who, with the com pieted parchment, reveais that he is the twin brother of Schiah-riar. The Caiiph attacks Sinbad but is struck down by the heod of the guards who dis-op pears ir the explosion of the bombs thrown by the twa thieves who arrive with the fire-ba i ioon. Firuz, Bahman, Sheherazode and Sinbod the Caiiph fly oway happiiy. 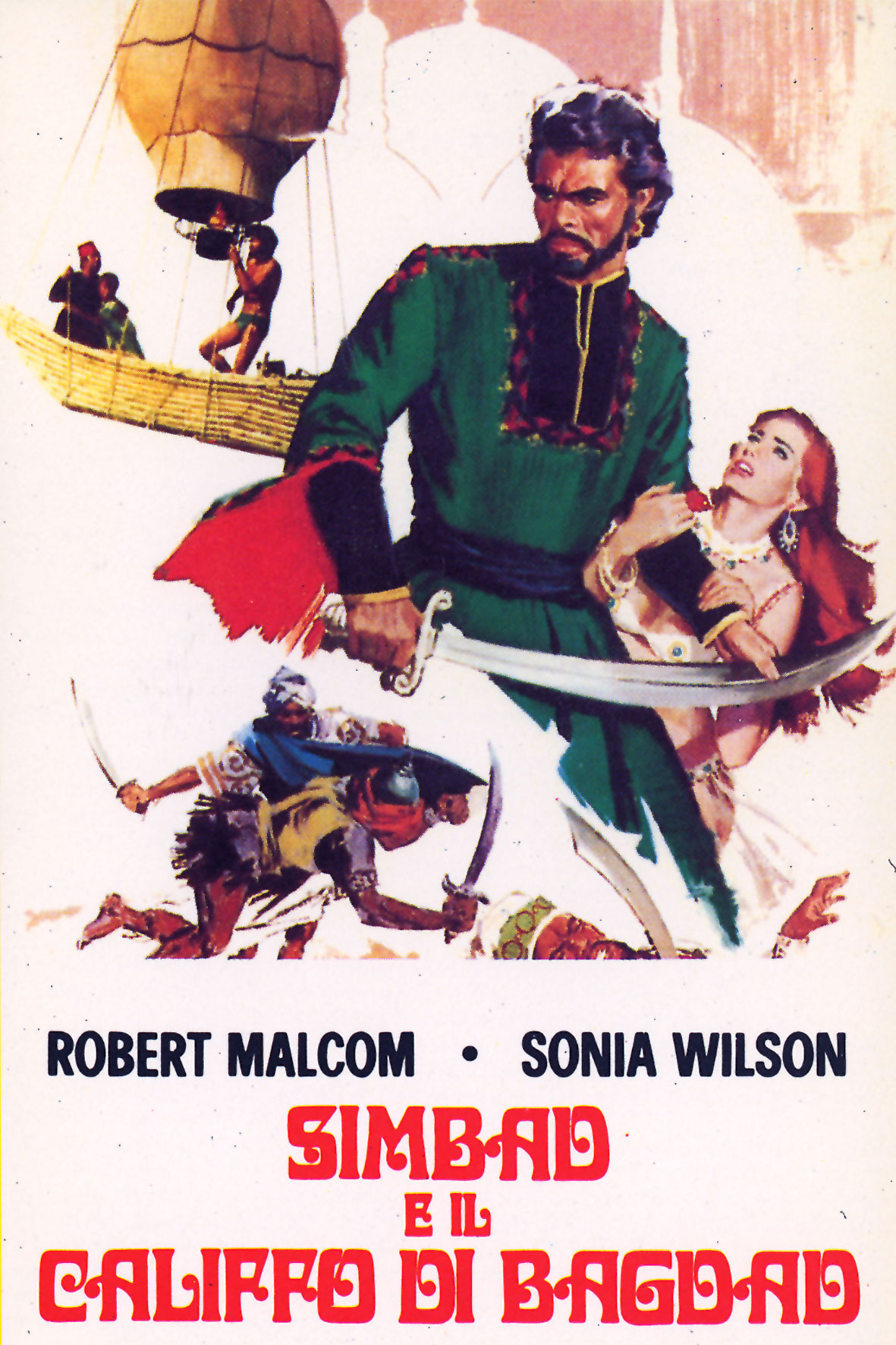