Patagonik, Latin America's leading film production company, also dedicated to the production of animated feature films since 1996 in its PATAGONIK ANIMATION studios located in Buenos Aires, presents a project called “THE ARK”, a classic animated film with features that turn it into an exceptional artistic, strategic and commercial proposal. Read More

The film tackles an absolutely universal subject, in a context of adventures and humour, in which the animals are the main characters of a story aimed at an audience chiefly of children from 4 to 9 years old. But the astuteness of the script and the irreverence of its treatment make it also siutable for teenage and adult audiences. The distinctive combination of a superb anumation and digital post-production quality with an inspired visual concept guarantees the film' distribution through several channels ( Theatrical, PayTv, FreeTv, DvD and Home Video). Patagonik, a company backed by a strong partnership structure and history, is undoubtedly a creative and industrial strategic partner for this project, since it offers remarkably low production costs for highly-elevated artistic and animation standards, typical of a European animated feature film.

One day, God saw that the wickedness of a man was great in the heart, and that everything they thought and planned was evil. Thus, He decided to send a flood of waters and destroy everything. But to ensure that life continues on the earth, a male and a female of every living species were to be kept in a boat that would serve as the seed from which life would begin again.
Then God asked Himself, “ Who should I choose for such a mission?” And He picked Noah, a kind peasant who was married to Naama and had three sons, Shem, Ham, and Japheth, who were always fighting instigated by their jealous wives. Before the big flood, they used to be a family that spent its days growing the land and occasionally doing unprofitable business with Farfàn, the most despicable merchant in the city of Jacira. God gave Noah the task of building an ark to save a remnant of life on hearth, but warned him, “ The boat will save all of you only if you show that you are worthy of salvation. “ when hearing that, a feeling of unshakeable will to fulfil God's mission overwhelmed Noah's soul. He sold all his possessions off cheaply in order to build the ark, and sent a letter to one pair of each animal species inviting them to board the boat. Japheth, the perfectionist and authoritanian oldest son, assumed to himself the task of turning what Noah had pictured as a little lifeboat into a huge wooden ark. Animal kingdom did not differ much from human society: Most of the animals only sought their own benefit, and the words solidarity and justice meant nothing to them. In spite of this, their good king, old lion Sabù, summoned a council in the jungle, at wich all the gathered species agreed to accept the invitation, except from the Unicorn, the Mammouth and the Bigfoot. Since the king was too old to embark on such a long and uncertain journey, he bestowed the honour on his son Xiro, aware of the fact that if the premonition about the flood came true, his first-born would turn into the new leader. Immediately afterwards, a striking column of animals set out for Noah's Ark, watched over by another lion, General Sora, and by Kairel, a little lioness who works as a secretary, is very diligent, but worries too much about her overweight condition. The list of passengers was not complete yet: after finding out about Noah's plans, and fearing for their lives, Farfàn and his wife Esther disguised themselves with furs, pretending to be a rare species called “saltafonte”, and boarded the ark. At that time, it was hard to find in Xiro an attribute that made him worthy of coming to thr throne: he was an immature lion that had never left his royal room before; he hadn't the slightest idea about leading his fellow animals or confronting another powerful passenger, tiger Dagnino, whose ambition was to become the new king of the animals. The world flooded with water, and the colossal boat started to sail an endless sea, while its passengers tried to organize themselves. Humans were under the command of Captain Noah, who - because of his short-sightedness and especially for having lived always in the desert - could not seem to set the course, and his family did not cooperate much with improving the situation on board. Animals, on the other hand, were under the weak leadership of Xiro, whose first rule forbade hunting the journey, in an attempt to ensure everybody's survival. From the shadows, a new and dangerous alliance was starting to threaten this already unstable situation: Farfàn, the merchant, and Dagnino, the tiger, were joining forces to overthrow Xiro and Noah, and take possession of the ark. On board everything could happen...and it actually happened. But Noah's will and God's intention overcame one pitfall after another. Finally, one day, the rain stopped and the waters lowered. And right when they began suspecting the end of the odyssey, the new partners caused the final dispute between carnivores and herbivores. The predators formed an alliance to throw Noah, Xiro and Kairel to the sea, and the tiger was designated the new king. When the family of the patriarch was locked and everything seemed to be lost, the ark smashed into a hill and started to sink.
However, instead of discouraging, them, the misfortunes strenghten their determination. Sailing on a boat driven by dolphins, Noah reappeared to save Xiro and Kairel and start the reconquest. Together, the three of them returned to the ark and set their fellows free by disembarking on the lands of a new world. Meanwhile, Farfàn and Esther were being unmasked, and evil Dagnino was being defeated by Xiro.

NOAH A kind, innocent man, with a great sense of determination to fulfil the mission entrusted to him by God. His short-sightedness and the fact that he had always lived in the desert put him at a serious disadvantage in commanding the ark. NAAMA Noah's wife. She is patient and balanced, and does her utmost to help Noah fulfil his mission and keep her family together. JAPHETH The oldest son. He is egocentric and a perfectionist with his work. He takes on the design of the ark, and directs his brother on how to buil it. HAM The second son. He loves animals, is extremely kind, and has an incredible physical strength. SHEM The younger son. A restless and impulsive man of strong will and unshakeable optimism. DAUGHTERS -IN-LAW SARAH, MIRIAM & EDITH Their contrasting personalities are often a source of conflict in the family. 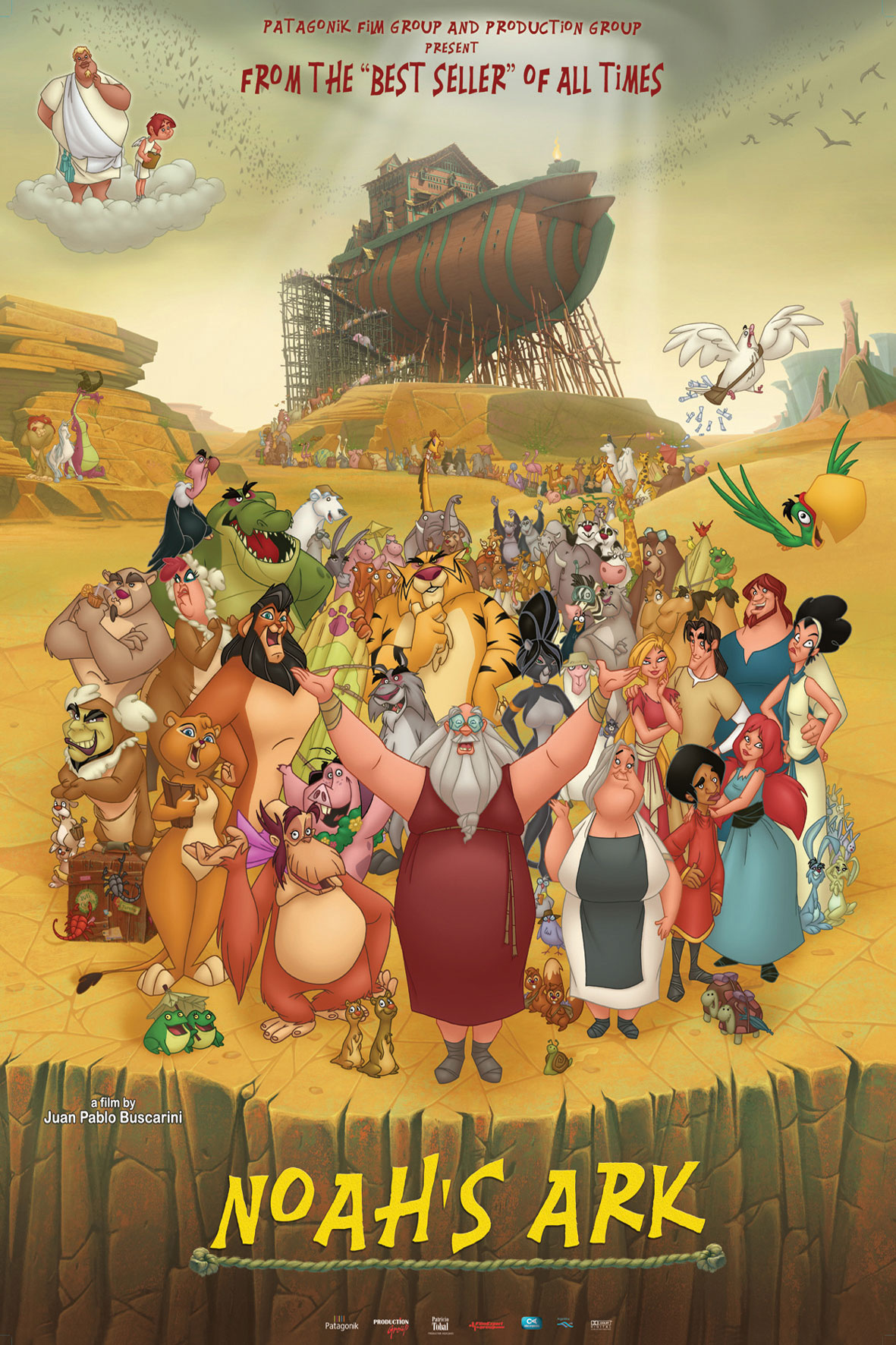